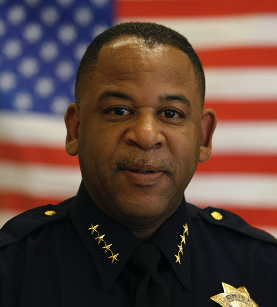 He began his law enforcement career as a volunteer Cadet and Reserve Officer with the Alameda County Sheriff’s Office.  In 1979, Chief Barnes began his tenure with the Oakland Police Department where he rose to the rank of Lieutenant.  He served in a variety of positions covering most aspects of law enforcement and police management.  Chief Barnes states his most rewarding assignments were patrol and community services divisions.

He currently serves as a Consultant and Interim Chief/Director for D. Stafford and Associates (DSA) and has been with DSA since 2017. He provides interim executive administrative leadership for DSA clients. His duties include the exercise of discretion, professionalism, courtesy, critical thinking, problem solving, and timely performance of job duties.

He is a member of the National Organization of Black Law Enforcement Executives, the International Association of Campus Law Enforcement Administrators, and the International Association of Chief’s of Police.  Chief Barnes holds a Bachelor of Arts degree in Individual Studies and Administration of Justice from Columbia College of Missouri.  He is also a graduate of the F.B.I. National Academy, 203rd session.

Under Chief Barnes’ leadership, the San Jose State University Police Department was recognized by campus administration for being noted as the leading California State University Police Department for two consecutive years, the number one rating for campus community customer satisfaction.  Also, the department was recognized for leadership in community services projects such as Northern California Special Olympics, Youth Summer Book and Holiday Toy Drive programs.  The department also received state recognition (first place) from the California Highway Patrol two consecutive years for its efforts in the statewide traffic safety Driving Under the Influence and Seat Belt program in the University and College category.

Away from his duties as Chief, Andre enjoys spending time with Bessie, his wife of 30+ years and his sons Andre Jr. and Justin.  In his “spare” time he holds a private pilot’s license and is certified to fly single engine airplanes.  He also coaches youth sports in Solano County.