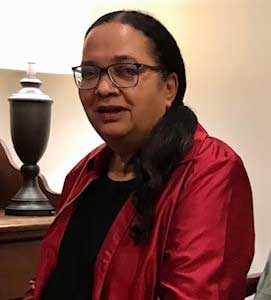 Chief Sampson is an accomplished law enforcement professional with vast experience in policing and public safety. She has worked in both municipal policing as well as campus policing.  She was formerly employed by Georgia State University, first as Director of Police Operations and was later promoted to Assistant Vice President/Chief of Police and then to Associate Vice President/Chief of Police. She was hired for the position in February 1996, shortly before Atlanta hosted the XXVI Olympic Games. Georgia State University hosted an Olympic venue.  In addition to her duties as Director of Police Operations for Georgia State University, she worked with all of the security, local, state and federal law enforcement on the XXVI Olympic Games effort.

She faced a number of challenges as the Director of Police Operations at Georgia State University. The University grew and changed at a rapid pace and its mission changed as well, therefore she was responsible for changing the police department to meet the times. To accomplish the task of professionalizing the department, she worked with University and community members in order to establish an understanding of what the campus and the community needed as it relates to safety and security. She guided and directed those efforts.  Her team worked with focus groups and cross-functional teams to establish a number of goals. The teams were composed of faculty, staff, students and community partners. We developed action plans to measure our progress and successes. She also took a very close look at the personnel in the department, assessing their strengths and weaknesses. After the assessment process, she restructured the department. This effort also involved extensive training and mentoring of individuals who were current members of the department as well as hiring personnel from other agencies.

Some of the successes under her leadership included reducing crime in one of the housing complexes by 18%. This was accomplished through our Scanning Analysis Response Assessment (SARA) model of Community Policing. A similar analysis was used to increase the efficiency of the Safety Escort Service. Working with student users, they analyzed the entire operation focusing on response time.  After making operational changes, they reduced the time from the initial call for service to arriving at a specific location by two minutes. Other successes were achieved by using the classic model of Community Policing that included education and enforcement efforts with the establishment of a Pedestrian Safety Team. Working with a group of faculty and students, her team established a need for education, training and enforcement and partnered with the Governor’s Office of Highway Safety for funding. The effort involved utilizing a combination of enforcement and education to minimize accidents and injuries involving members of the GSU community.  Her team also received  a  number  of  awards  from  the  Atlanta  office  of  PEDS,  (Pedestrian Educating Drivers about Safety). She also partnered with local, state, and federal police as well as other colleges and university police and private security in the downtown Atlanta area to achieve a synergistic effect as it relates to securing the campus. This took the form of actually patrolling, investigating and utilizing joint task forces to achieve a general or specific purpose.

In 2008, she was promoted to Assistant Vice President.  Her duties at that time were elevated to include Emergency Management, Police, and Building Services. The addition of Building Services added two hundred additional personnel to her area of responsibility.  This was done, in part, to train and utilize all of these individuals as part of the security function even though their primary function remained cleaning and maintaining the buildings and the upkeep of the grounds. This is a unique arrangement, but it worked for GSU. This also added an additional layer of security to our community. The Building Services personnel embraced their added duties and responsibilities.

Under her direction and leadership, the police department achieved what very few police and security organizations achieve by earning the “Triple Crown” of proven professionalism. This was achieved by the department attaining State of Georgia Certification by the Georgia Association of Chiefs of Police, International Accreditation by the Commission on Accreditation for Law Enforcement Agencies (CALEA), and Accreditation by the International Association of Campus Law Enforcement Administrators (IACLEA). Georgia State University is the only campus police organization in Georgia to achieve the “Triple Crown” of proven professionalism.

Connie has been working as an Associate of D. Stafford & Associates since 2017 and has been assigned by DSA as an Interim Director of Public Safety at Forsyth Technical Community College and Young Harris College, among other consulting assignments.