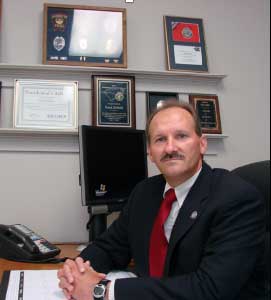 Mr. Frank Zebedis began his law enforcement career in 1985 after receiving his degree in Criminal Justice from the University of Akron, Ohio.  He started as a patrolman with the Barberton Police Department in Barberton, Ohio and served as a Field Training Officer, FOP President, and 2 years as a member of the S.W.A.T. Team.  In 1991, the Rock Hill Police Department hired him as a patrolman. In 1992 he was promoted to investigator and eventually rose through the ranks until he was promoted to Lieutenant.  As a Lieutenant, he was assigned to the patrol division as the Commander in charge.  During his time with the Rock Hill Police Department, he served 5 years as a member of the S.W.A.T. Team before being reassigned as the Emergency Incident Commander when he was promoted to Lieutenant.

Mr. Zebedis previously served on the IACLEA Accreditation Commission Board of Governors. Mr. Zebedis is a past Chair of the International Association of Campus Law Enforcement Administrators (IACLEA) Domestic Preparedness Committee as well as past Southeast Regional Director. Mr. Zebedis has also served on the Advisory Council for the Campus Safety Journal and has given several presentations on campus safety.

In 2013, Mr. Zebedis was awarded a Presidential Award from IACLEA for his work with developing and teaching Critical Response courses.