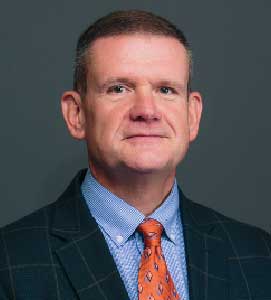 Bill Lafferty has 35 plus years of experience in Law Enforcement and Public Safety and over 25 years of experience within Higher Education.  He began his career with the U.S. Air Force as a Security Police Specialist.  During his military service, he worked his way up through the ranks and performed a variety of specialized duties within the law enforcement and security field.  These duties included patrol officer duties, patrol supervision, crime prevention programming coordinator, asset and resource protection specialist, and a quality assurance reviewer.  Bill was also instrumental in implementing an Air Force Anti-Terrorism response plan and protocol during his tenure.

After the Air Force, Bill joined the public safety team at Villanova University where he performed duties as a Patrol Sergeant, Shift Lieutenant, Assistant Director of Housing Security, and Associate Director of patrol and investigatory operations.  After nearly seven years at Villanova, Bill left to become the Director of Public Safety at Gettysburg College.  In his 20th year at Gettysburg College, Bill is the current Assistant Vice President of College Life.  Bill’s responsibilities include: direct strategic management oversight of all public safety operations; sexual and relationship violence response and investigation policy and protocol development; emergency operations management; life and fire safety; behavioral threat assessment; the oversight of institutional Clery Act and Title IX compliance requirements for the college; and during his tenure with Gettysburg, he has managed student life development areas including: Greek Life, Student Activities, Experiential Education, and Student Conduct.

Bill is additionally the current Director of Government Relations with the National Association of Clery Compliance Officers and Professionals (NACCOP).  In this role, Bill is responsible for monitoring key public policy issues facing institutions of higher education, with a particular focus on those that impact the Clery Act.  Bill is NACCOP’s representative to federal agencies, Congress and other associations regarding NACCOP’s views and legislative priorities within the higher education community, public safety, and beyond.

Bill is a graduate of Eastern University, where he earned a Bachelor’s Degree in Organizational Development, and Villanova University, where he earned a Master’s Degree in Criminal Justice Administration.  Bill is an associate with the consulting firm D. Stafford & Associates, a highly reputable firm specializing in delivering assessments of campus law enforcement and public safety agencies, audits of their compliance activities, including specialization in the Clery Act and Title IX.  Bill was certified as a NACCOP Clery Compliance Officer (CCO) as part of the program’s first cohort in July of 2017.  Bill previously served a two-year term as President for the Northeast Colleges and Universities Security Association (NECUSA).